John Eagle is widely recognised for his contribution to ceramics in Victoria, including his pursuit of excellence in functional pottery. A graduate of RMIT, John enjoyed early success when selected for inclusion in the seminal Victorian craft exhibition, Craft Victoria '75 at the National Gallery of Victoria. In 1988 John was awarded the National Bicentennial Art-Craft Award for Functional Pottery and during the 1990’s John's work earned the prestigious 'Craft Mark accreditation. He is also known in wider ceramics circles through his writing, mentoring and the inclusion of his work in exhibitions at galleries in Australia and overseas. His prize-winning ceramics often feature a striking copper red glaze, which remains a signature aspect of his work to this day.

John Eagle has worked with clay for over 40 years with a particular focus on developing copper red glazes; recent work involves what John describes as ‘composite reds’ and requires the blending of a range of compatible glazes to give the impression of a moving fluid surface.

'This is Where I live' is an exhibition of recent ceramics by Ararat artist, John Eagle. John's association with Ararat began following his artist's residency at Marian College. This residency evolved into a teaching role and a move to Ararat with his wife Rosemary, who is also an artist specialising in printmaking. This exhibition features richly glazed ceramics informed by the landscape around Ararat, including Mount Langi Ghiran, Mount Cole and the Grampians National Park. 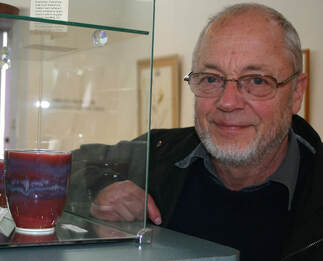 "Although I had dabbled with clay since 1960, or thereabouts, it wasn't until 1969 when I was appointed head of the art department in a technical school in Melbourne's west that I started to become more than just a dabbler.  At the end of my first year the teacher who had taken ceramics and a number of night classes in the subject moved to another school.  The night class was already enrolled and someone had to take it, so with the help of Harry Memmott’s ’Australian Pottery Book’ and my wife Rosemary, who was studying ceramics at RMIT at the time, I taught the night class and this is when my life as a potter really began.  After two years of this I enrolled at RMIT as a fine art student with ceramics as my major. This was a very busy period for me as I was teaching part-time and studying part-time and our daughter Kate was born.  I thrived in the basement of the RMIT Art Department and as a second-year student my work was selected for the Craft Victoria exhibition at the National Gallery in Melbourne.  I completed my course and over a period of time started to focus on function and quality in the handmade object and that focus has remained ever since.

During the 1970’s and 1980’s brown was particularly prevalent in ceramics which I suppose made me realise that I enjoyed colour as well as form and function.  It was during these years that my interest in copper red glaze started to become a minor obsession and if I am known for anything it is probably my copper reds because they have taken so long in development.

With copper red every firing has the potential to be different because every aspect of the work requires control; the thickness of glaze application, the setting of the kiln, the speed of firing, the timing of reduction, the degree of reduction (this is controlled by the flu damper which will dictate the length and colour of the reduction flame), and lastly the controlling of the cooling period after soaking.  So, as you can see, the process can be a bit of a fiddle.  The availability of Southern Ice Porcelain clay has also been quite a factor in the way my work evolved.  Simple domestic objects that feel so good to hold and use have made me realise that I still have the challenge to produce better and better functional work.

And that's probably about how it happened, and the fact that I am still wanting my work to be something that people use and enjoy every day keeps me enthusiastic and focused and striving for the perfect product.  The satisfaction of making and the enjoyment of other people enjoying and using the end result that has the definite mark of the handmade product is, to me, as good as it gets.

The process of actually forming the clay, feeling its constant motion, shaping and creating a frozen moment have always been important. I also strive to represent the Australian landscape in some of my work using the magic of glaze manipulation and kiln atmospherics."